Joined Sep 26, 2004
·
126,343 Posts
Thanks to the help of a great importer who has gotten me many rare handguns, I was able to add one of these incredible unicorns to my collection. It is a gun that years ago I was actively trying to find, but gave it up thinking they were more folklore and legend than they were a reality. I honestly haven’t given them much thought at all over the last 6-7 years.

Pardini was founded in Italy by Giampiero Pardini, who was a competitive shooter. They are mostly known for their incredibly precision rimfire target pistols. However, they have built some very nice shooting centerfire pistols for many years, starting with the PC Series and then transitioning to the improved GT Series. I’ve owned a standard Pardini GT9 for well over a decade and I’ve said many times on this forum and others that it’s the single smoothest semi auto handgun I’ve ever owned or shot. The ergonomics are about perfect as well and the adjustable trigger is absolutely phenomenal. Also, due to the grip angle and deeply undercut trigger guard, the bore axis is super low. It’s a large, beefy pistol and despite its aluminum frame, the GT9 weighs in at a hefty 39oz with an empty magazine. It’s a very robust gun with a large frame and thick slide and barrel. “Overbuilt” would be a good description for the Pardini GT Series. The GT9 also features simple breakdown and ambidextrous controls. One of my favorite features of the design is that the slide rides inside the frame, much like the Sig P210 and CZ 75. :thumbsup:

The GT9 is available in a variety of finishes. The most common is a black anodized frame with a matte blued slide. There is also a variant with a bronze frame and blued slide. One of the nicer looking examples is the GT9 Silver. Which features a silver aluminum frame and a silver finished slide. Though I generally prefer blued guns, I must say that certain pistols look better in silver and I feel the Pardini is one of them. The GT9 is available with a 5” or 6” barrel. Pardini also offers a GT40 and GT45. The GT45 has an even larger frame, which does not feel as comfortable in my hands.

This thread is obviously not about the standard Pardini GT. This thread is about the incredibly rare Pardini GT9 INOX. The INOX differs from 99.9% of Pardini GT Series pistols, because it has a steel frame. The standard GT pistols currently cost about $3000 give or take, depending on exact configuration. The INOX cost nearly $6000 a number of years ago before being discontinued. Other than the steel frame, the INOX features a gold plated trigger and stainless controls. Besides the more expensive materials, the INOX retail price of more than double the standard GT9 cost at the time, was also due to greater attention to detail. The INOX models were personally inspected and then hand finished by the founder of the company, Giampiero Pardini himself and many of the parts, including the barrel, are not compatible with the standard GT9. Due to the price and very long wait times, very few INOX pistols were ordered. In addition to that, I understand Pardini actually refused most of the orders they did get, due to time restraints. In fact, despite being on the Pardini USA website for a short time, I’m not convinced any were ever shipped to this country. Finally, Pardini stopped building them completely. The INOX was also only ever offered in the 9mm platform and was available with both the 5” and 6” barrel. When I mentioned incredibly rare, I mean the rarest pistol variation I own or have ever owned. According to Pardini, only 40 examples were ever produced. Both the extremely high price and even further limitations of availability were the reasons. As I mentioned above, of those 40, I’m not convinced Pardini USA ever had any of them. Therefore, I really don’t believe there are any in this country other than maybe a few private imports, such as mine. This gun is a true unicorn and Holy Grail for me in every sense of the word. I’ve wanted one ever since I bought a standard model so many years ago, but I honestly never thought I’d find one. It was never on a “must have” list, because I thought it was mission impossible. Every previous lead I had on one turned out to be just a Silver model that someone had mistakenly identified or perhaps purposely misidentified. Needless to say, its definitely a major highlight of my long collecting career.

As for this particular example, it’s the 2nd pistol built during this particular generation of Pardini INOX (serial # IK10002) and built in 2008. “I” standing for INOX and “K” being the generation code Pardini used. I believe Pardini built an earlier INOX generation as well that may have consisted of a few pistols. Its also the 6” long slide variant, which may likely be one of only 10 to 15 ever made, since the 5” was always the more popular GT9 variant. Condition is great and its complete with its original case and papers. It was advertised as only having been shot 200 rounds. Having described the standard 5” GT9 as hefty, despite its aluminum frame, as you would suspect, the INOX models are downright heavy. The 5” is heavy enough, but this long slide variant is like a solid stainless steel monolith. It weighs a whopping 57.4oz with an empty magazine. Not only is it my heaviest handgun right now, it’s the heaviest service caliber pistol I’ve ever seen. The only semi sutos I’ve ever owned that were heavier were a Desert Eagle and a 44 Auto Mag. Luckily, I really love heavy target guns, so I’m thrilled with the incredible heft of this handgun. I also love the super sleek appearance. The slide lightening cuts are a bit funny to me, given the pistol’s weight, but I guess without them it would weigh about 60oz. I don’t necessarily care for the look of them, but it does show you just how thick the slide actually is. I could do without the gold trigger, but in this case I can make an exception. Its real gold plating instead of just fake bling and helps set the INOX apart from your “everyday” Pardini GT9 Silver. Pardini’s intent was to make the INOX stand out as a special handgun. I’d say he succeeded.

As rare and valuable as this is, I intend to shoot it a decent amount. Its built like the proverbial tank and can’t be hurt, especially by 9mm ammo. Besides that, Pardinis are shooters and designed to do that better than nearly any pistol ever made. I can only imagine the extra weight of the INOX will make that even more so.

So there you have it. This is the very first time I’ve ever laid eyes on one of these unicorns in person. In fact, its hard to even see a stock photo of one online. Even Pardini USA’s INOX webpage shows a GT9 Silver in place of the real deal. For a long while, I wasn’t sure they even existed outside of one stock photo I found, which I thought may have just been a pre-production prototype. I’m so glad that I was proven wrong and I’m very happy to present this beautiful firearm to the forum. I’ve always loved my Pardini GT9 as a shooter, but my one knock on it was its aluminum frame, so this INOX is truly a dream come true.

I’ll skip my usual question of asking anyone if they have one of these, because I already know the answer. However, who here has a Pardini GT Series of any kind? :dunno:

As always, please enjoy the pics and share your thoughts. 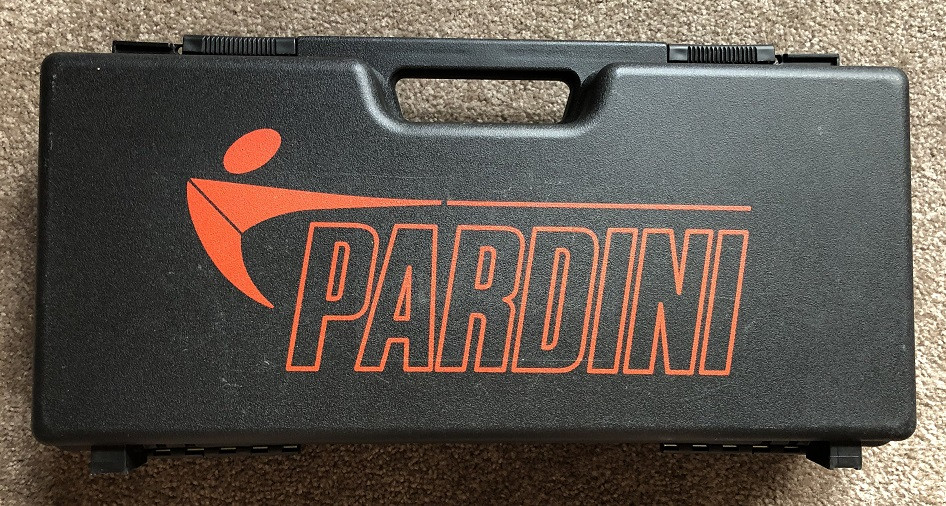 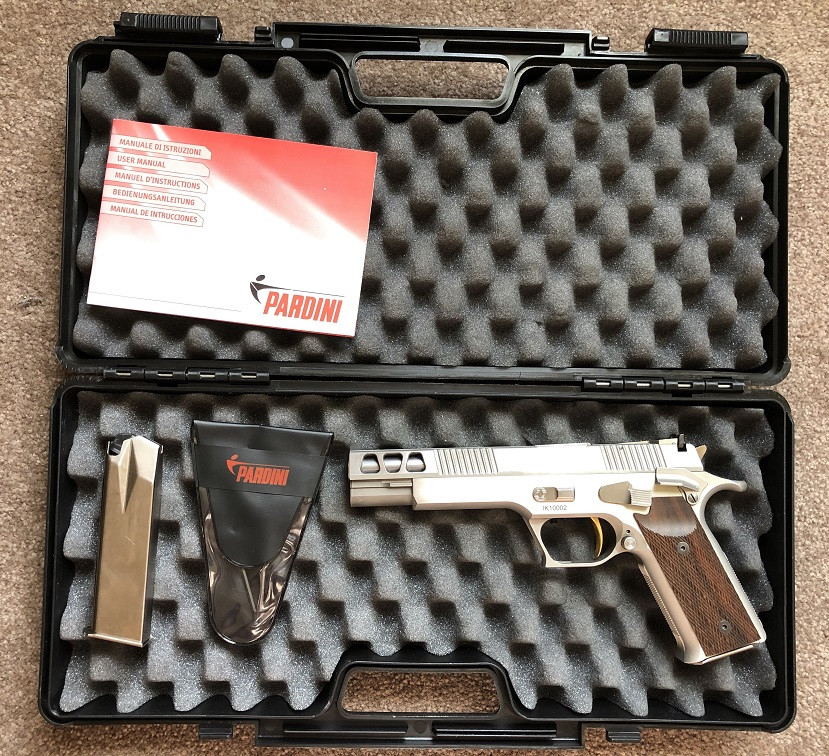 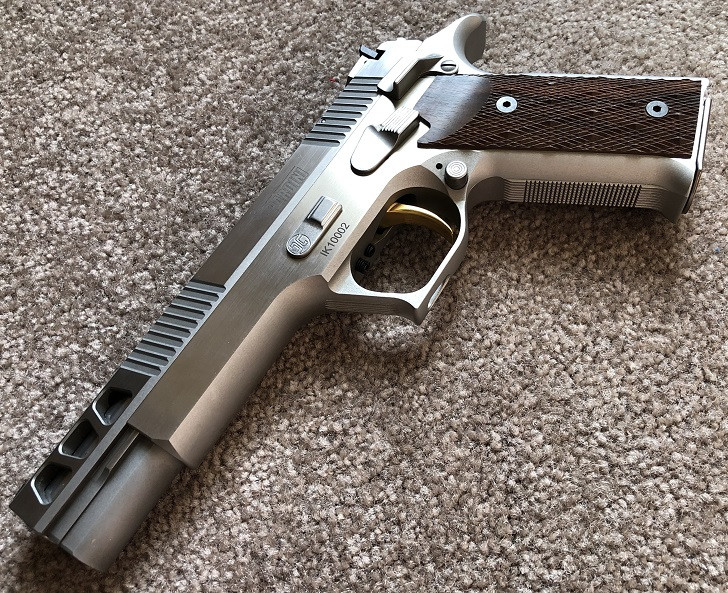 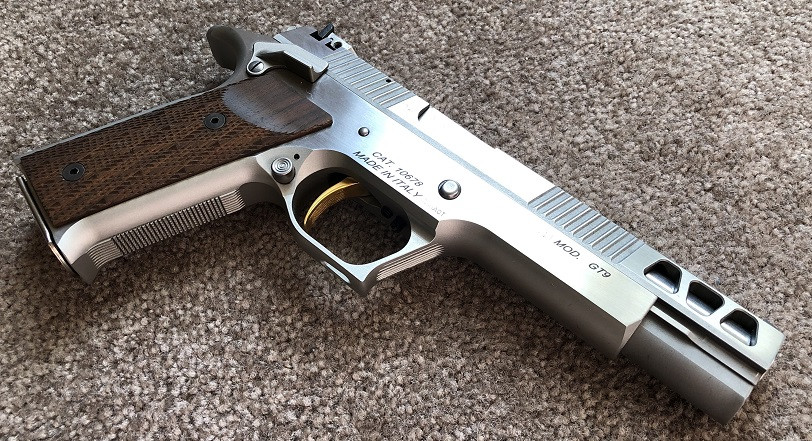 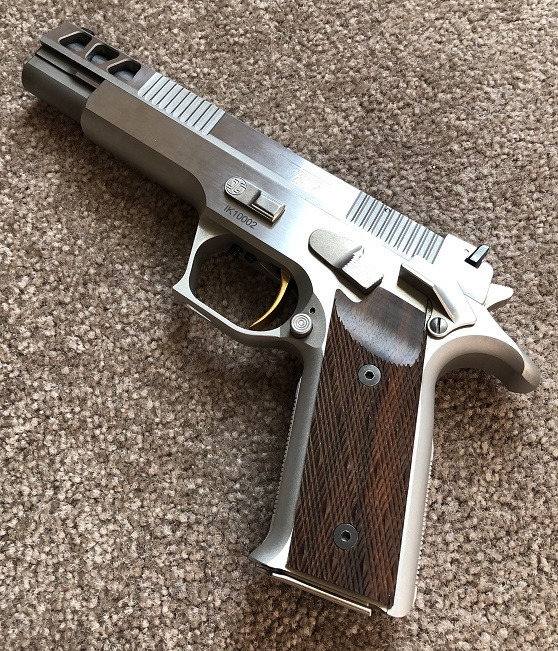 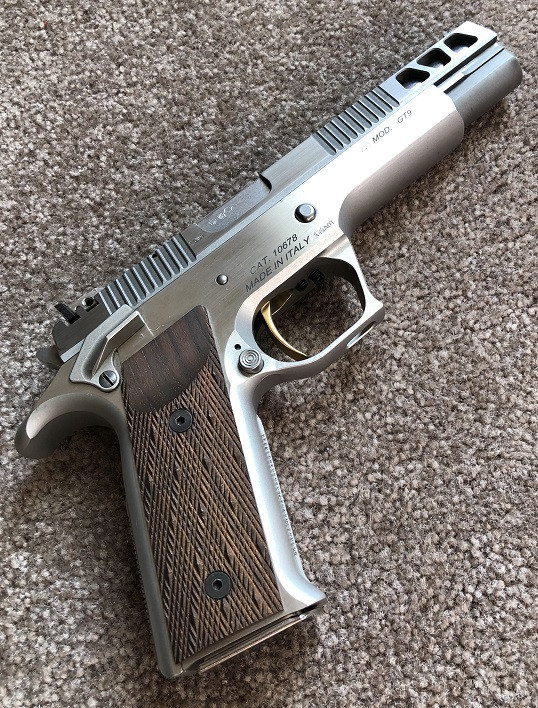 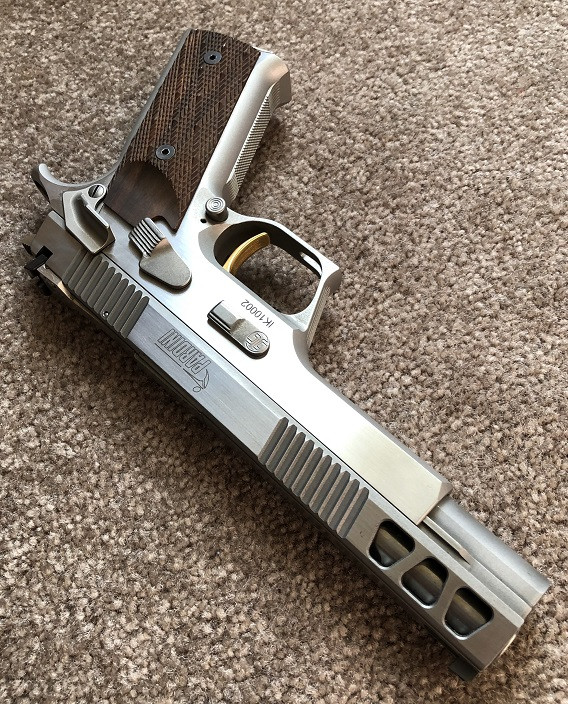 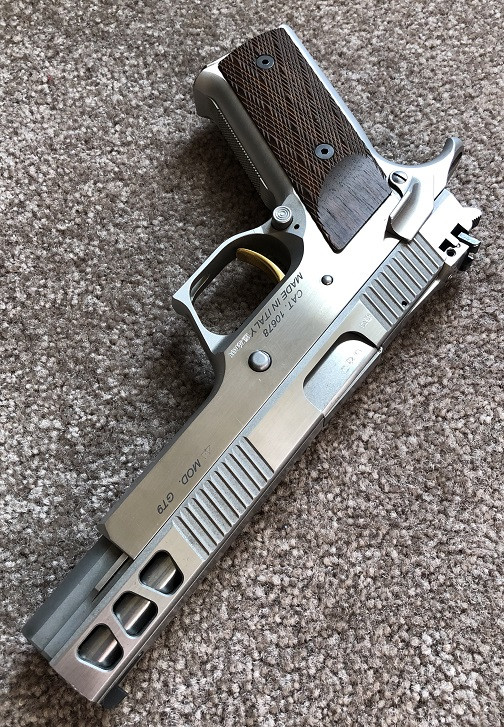 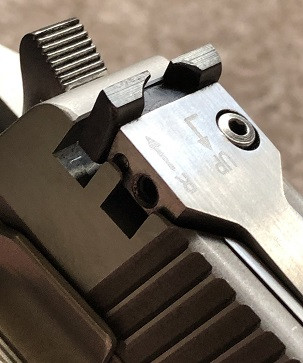 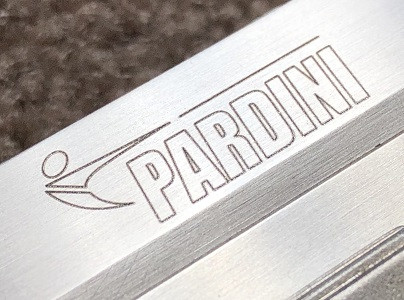 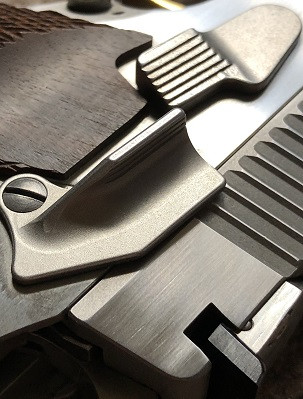 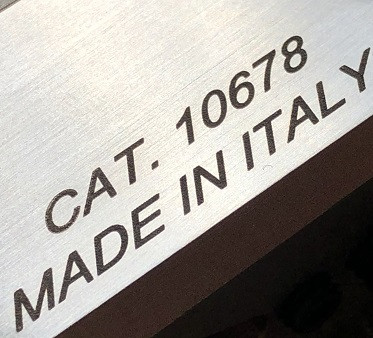 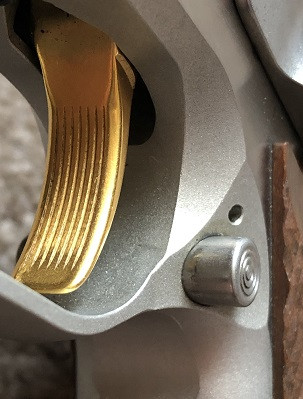 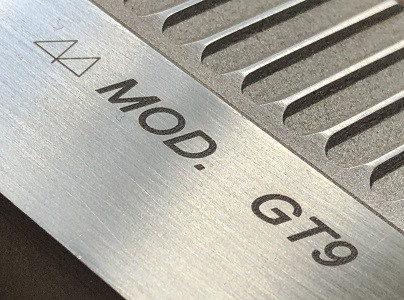 Here it is with my standard Pardini GT9 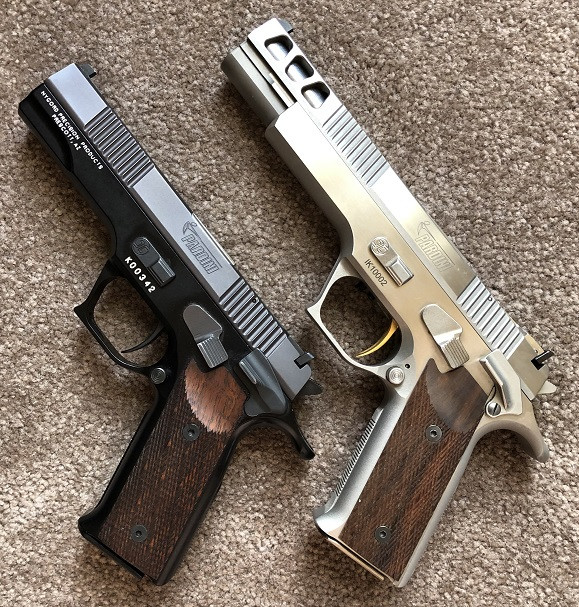 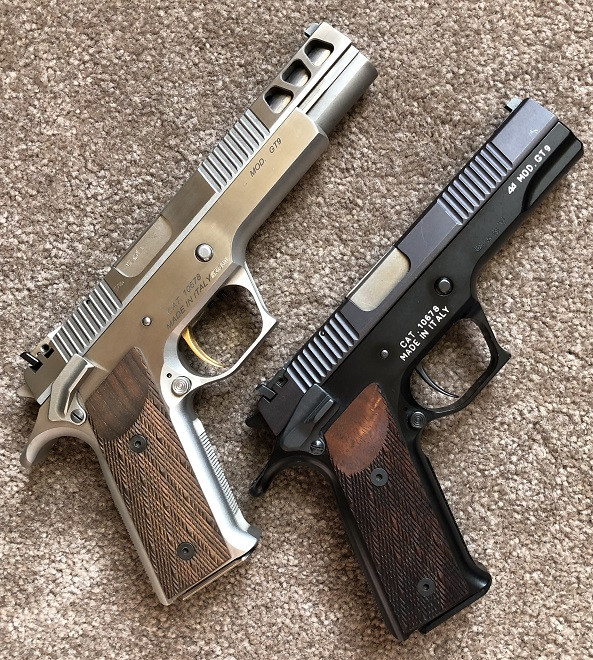 Joined Nov 19, 2002
·
2,433 Posts
Brian - I am super happy for you friend. I can only imagine the satisfaction and pride in adding such a fine piece to your collection. Enjoy it and please don’t skip the range report!

Always nice to get an elusive one.

Thanks for sharing it.

Joined Jan 4, 2018
·
818 Posts
Congrats, thanks for the pics and write up, Ive never heard of Pardini before. It does look like a great shooter, enjoy.

Let us know how she shoots. With that heft, it should feel like a 22 .

Joined Jul 13, 2003
·
15,587 Posts
Wow. Indeed it's much different than anything else. Just the fact that it was hand made and fitted by the owner of the company...makes it unique. Congratulations! Enjoy this tank.

Handsome, but let me be the first to ask ...

'Does it take Glock mags?"

Might be worth a “mic drop”. Gonna be hard to top this.

Thanks for another interesting read on yet another pistol that I didn't know existed.

Sent from my SM-G892A using Tapatalk

Might be worth a “mic drop”. Gonna be hard to top this.

From a rarity standpoint, no way I’ll ever top it, Bucky. In fact, it’s hard to top from any standpoint.
J