Joined Jun 9, 2002
·
37,715 Posts
How and Why Speer engineers developed the round, and what they expected of it for their NYPD agency customer ...

Joined Jun 9, 2002
·
37,715 Posts
The first gel test I observed with the then-new Speer 135gr +P GDHP was at a hosted gel event (Winchester Mobile Lab). The block was previously used and had been sitting outside for a while, so the 'calibration' was anybody's guess.

I don't have the notes from that afternoon at my fingertips, but I think the 4LD shots were approx 10+ inches, which is where some Remington 125gr +P BJHP loads fell in the same block (fired from a 360PD belonging to one of the attending cops, and it was also his Rem loads used). Seemed reasonable, and not all that different from what was later found in that TDP .pdf that Speer put online for a while.

Joined Jun 9, 2002
·
37,715 Posts
Dunno about the rest of you folks, but if .38SPL load can be accurately fired from a snub and expand anywhere from .45-.60" after defeating Heavy Clothing in 10% organic gel, producing 10-13" penetration, I'm not losing any sleep over carrying it. That's a better deal, to me, than the days of little or no expansion with excessive penetration.

I won't even lose any sleep with one of the large cavity JHP's (like the 135gr GDHP) that may occasionally fail to expand, but provides 'cookie cutter' shearing and cutting with almost full caliber wide sharp shoulders, compared to the old 158gr JHP or JSP +P's that had soft, rounded shoulders and sometimes looked like they could be reloaded and fired again.

HKMark23 said:
How is .45-.60 a "better deal" when it often doesn't penetrate deep enough to hit vital structures as I have found?


Yet 38 LRN and FWC have proven themselves as excellent fight stoppers on the streets for well over half a century. Can anyone point to a vetted long term study that directly compares relevant wounds created by JHP and LRN/FWC/Etc on the streets? Something where all data is provided and can be studied by others.
...
Click to expand...

You can rely upon your personal game/varmint animal GSW experiences to your heart's content. No biggie.

Penetrate 'deep enough' is an evaluation and judgment that will always require situational context, and even then it can easily vary from one instance to the next.

.38SPL RNL and LSWC have been excellent fight stoppers for well over half a century? Really? Come on, man.

Asking for vetted studies is nigh unto an impossible task to ask when it comes to shooting incidents. Granted, while the typical motoring public doesn't typically have access to the shooting incident data compiled by some American LE, the DoD and the Canadian RCMP, that doesn't mean the data becomes meaningless.

Besides, even when you talk to folks who do have access to such long running data, the answer often remains ... "It depends" regarding effectiveness of typical handgun calibers and bullet designs.

The FBI settled on a 12" "minimum" penetration depth for their purposes. For a while another major fed agency was satisfied with 10", but they didn't get the press coverage, and they were more interested in actual OIS results than strictly considering lab testing.

Having a JHP expand in the .45"-.60+" range, under various conditions normally encountered in OIS and private defensive shooting situations, is pretty good, all things considered. Also, remember that the 12" metric used in gel testing isn't the same thing as traversing 12" of human anatomy. Sure, taking the potential for an intervening limb into consideration, or an oblique angle presentation of the threat, may require deeper bullet travel than a direct 'frontal' presentation. I've known of even normally (tested) deeply penetrating calibers/bullets being deflected by the relatively small wrist/forearm bone structures,though, or a .45 Ball becoming a pinball when it glances off the anterior surface of a scapula, but others behaving differently. How about a .380 Ball round being stopped by the spine (rear entry wound), but other .380 Ball rounds going through front windows and at least one interior wall of a house (drive-by). Bullets can be unpredictable, and introducing intermediate barrier materials can sometimes muddle things.

I was really, really interested in the relatively new science and art of firearms ballistic testing when I was given a copy of the then-new FBI service ammunition testing report in '90, and closely followed the IWBA in the 90's. However, looking at the OIS incidents throughout the years, meaning those local incidents and those being reported and discussed among LE trainers in ensuing years, it all seemed to combine into a montage of ... it depends.

After enough time I simply looked for any of the premium JHP's being produced by any of the major American makers, and accepted that the bullet of today might have undergone any number of revisions since I first started using it, and would do so again, in the future ...

... and focused my attention and efforts on those things over which I could have some measure of control. Like keep updated on the laws and case decisions that might affect things, and keeping current on my training/practice, awareness and practice of practical tactics and weapons maintenance.

I retired my .44MAG's, and looked at 9's, .40's and .45ACP's as being adequate replacements for my long-favored .357MAG service & off-duty weapons. It's just a handgun. The latest premium duty and defensive handgun loads are still just bullets, but the more modern JHP's can offer more potential for consistent expansion (under intended, reasonable conditions), and they're being engineered to offer the potential for keeping penetration within the common industry 'standards', when everything works as designed and intended. It depends.

I don't lose any sleep over the minutia anymore. Hell, I've even been known to carry the bargain/old style JHP's made by the various major makers, even though they may not have the ability to resist plugging and exhibit robust expansion in the typical ballistic testing protocols. Beats Ball in the respect of offering at least the potential for deformation and expansion. Still depends, though.

Joined Jun 9, 2002
·
37,715 Posts
Kind of a coincidentally timely thread. I just cleaned the M&P 340 I used for my LEOSA qual (the newer No-Lock model) and decided to use it to replace the older Lock model I've been carrying (from the original production run, I was told, when I called the factory to order it as a LE discount in '05). Got out a fresh box of Speer 135gr +P and loaded the freshly clean M&P 340 snub, which will serve pocket-holster duty for my afternoon sojourn to my cigar club.

Joined Jun 9, 2002
·
37,715 Posts
An interesting article covering some of the older .38SPL ammunition developments. Might interest some of the younger shooters, or even those who weren't paying a lot of attention back then. 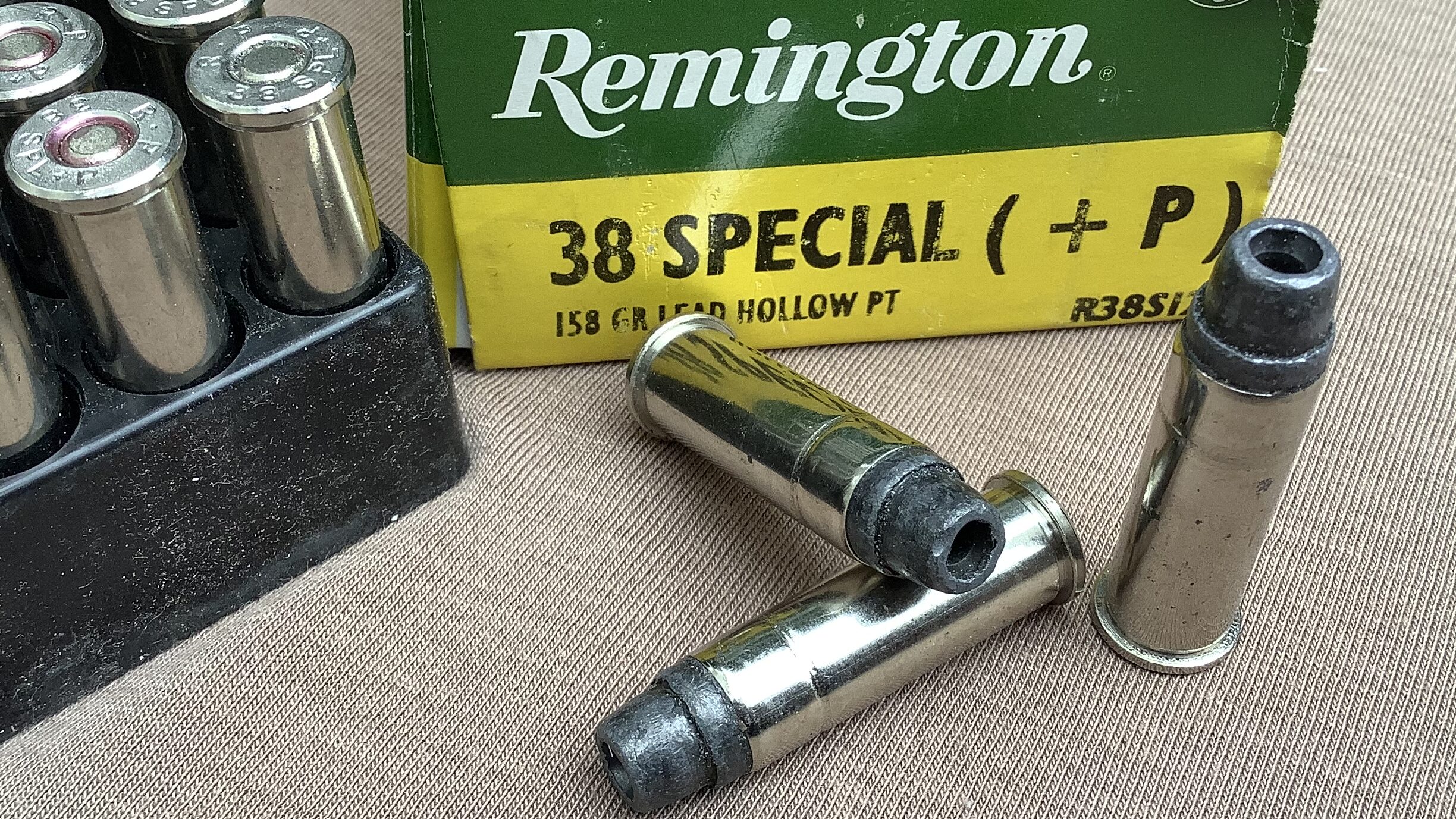 The most common question about revolver ammunition right now is, “where can I find some?” The demand-induced shortage which began in 2020 is still very much with us, and finding some ammunition—of any sort, as long as it’s the right caliber—is foremost on the buyer’s mind. However, when we’re...

Unfortunately for her, my wife's Colt Cobra is restricted to standard pressure .38's due to it's aluminum frame. As it is, she won't carry the lightweight Cobra much less anything heavier, so I guess I'll have to get her some spray or something. Wimin... just not much you can do about them!

The only +P ammo that will work in the Cobra is the Win. 95 gr. SilverTip (now discontinued) because the round, even though a +P, is very mild. ...
Click to expand...

I faced the same concern when it came to that nifty little M37DAO (made on the older -2 Airweight frame) made for that canceled overseas production run. While some of the barrels used were apparently from 442's, with +P language, when I called the factory they eventually said that the older Airweight frame was not rated to use +P ammunition. (My particular 37DAO model had the standard barrel which lacked the language stating it was rated for +P, BTW.)

Since I wanted to keep that little DAO Airweight running for a long time, I decided to stick with standard pressure ammunition. I didn't want to restrict myself to 158gr LSWC or 148gr WC, so I ended up using the standard pressure 110gr JHP's offered by Federal (Hydra-Shok) and Winchester (STHP). Both offered fine accuracy in my gun, in my hands.

FWIW, I remember in the earlier times (revolver days as a young cop) when the little 95gr STHP had earned a reputation for shooting quite low, due to the lightweight bullet. The 110gr standard pressure modern version doesn't exhibit that ... in my snubs, in my hands. The 110gr bullet weight isn't ideal - I like heavier bullets - but it doesn't seem to offer POA/POI concerns in my assortment of J's.

I finally tried the standard pressure Hornady Critical Defense, using the 110gr FTX bullet. It offered surprisingly less muzzle blast and was a tack-driver, again, in my guns, in my hands. After I'd tried it in some of my J's (37DAO, M&P 340's & 642's), I picked up several boxes of it. I'd primarily intended to just use it in my 37DAO, but I occasionally use it in one of my +P or Magnum rated J's, simply because it's so mild and accurate. The only ballistics testing I can find seems to show it offers acceptable performance, in my opinion, for my needs. Sure, I still think the midweight JHP's pushed to +P pressure are better, overall ... but it lets me carry that older 37-2DAO Airweight without excessively worrying that I'm going to crack the forcing cone or stretch the frame window.

Oh yeah, I did put back some boxes of the budget Hornady American Gunner 125gr JHP standard pressure load, but I'd be surprised if that bullet would consistently expand when fired at snub nose velocities. Makes for good range fodder, though, along with 130gr Ball, and saved as a backup for the 37DAO's carry ammo, should I run out of the 110gr standard pressure JHP's.