If more than one, how many of the same firearm model(s) have you ever bought or owned?

Jump to Latest Follow
Repeats of the same model even if you didn't have them all at the same time. For any reason, except as a retailer or business. Personally bought or owned at any time even if you trade often or make private sales where allowed.

Another thread made me wonder. Someone said they'd bought four Shield Pluses and I just bought my sixth, for a gift to a relative when she gets her carry permit this week. I recall that some of you have mentioned you've had multiples of some Glock models or ARs. And some have said they've bought replacements for guns they had in the past but lost or let go, maybe more than once.

Needs to be the same model in the same caliber, but can be different generations. Different barrel lengths, sight systems, colors, etc. are okay if it's otherwise the same model. No need to split hairs that much. Use your own judgment for any other variations.

It doesn't matter whether you had all of them at the same time or not. The reason you had them doesn't matter, nor where you got them or what you did with any of them.

For instance, I bought the Shield Pluses at different times for gifts (perfectly legal where I live as long as the recipient can legally own a firearm) and the first one for me. I still have that one and the newest one for now. I've never had more than three of them at any one time but in all I've bought six. I also bought a duplicate of my 642 revolver because there are two people I wanted to have one someday. And I've had two of the regular Shields. So I'll vote 6 for the Shield Pluses, and also vote 2 because of the two 642s and the two regular Shields I've had. I hope that makes sense.

I was first going to ask only about the greatest quantity, but decided to allow for multiple answers for those who have had more than one of several different models. No need to vote 1 unless you've never gotten more than one of any model.

I'm just curious about how common it is to have had more than one of the same model(s) of firearms over the years for whatever reason, or to buy the same model more than once.
Reactions: Uncle Mark, LaneP, arkdweller22 and 3 others
Save Share
Reply Quote
81 - 100 of 102 Posts
B

· Registered
Joined 2 mo ago
·
104 Posts
I doubt ill have multiple of the same gun at all, ever

· Can't type, don't spell, what's grammar.
Joined Feb 26, 2016
·
1,925 Posts
I’ve had many duplicates of handguns, rifles and shotguns in my collection over the years. The single most owned model probably goes to the Ruger MK pistol or AR15 if you count all the different variants I’ve owned.
I’d also very often have multiples of the guns kept on hand for guests to learn on, plink with.

· Registered
Joined Mar 6, 2009
·
600 Posts
Had half dozen G20 back when mags were completely unavailable otherwise. Whittled down to 1.

· Registered
Joined 6 mo ago
·
24 Posts
I've done this quite a bit over the years and mostly in Sig and Hk's.
5 was the most of any one model.

· Registered
Joined Feb 22, 2001
·
2,800 Posts
They are the same models but handmade and all are different enough for the grips to not be interchangeable. 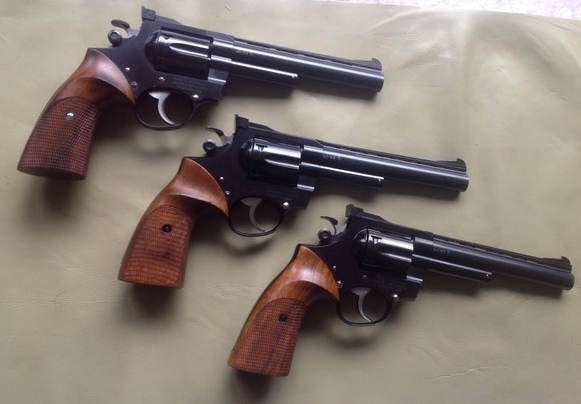 I've got to get rid of some stuff.

· Registered
Joined 1 mo ago
·
12 Posts
Does having a 19X and a 45 count?
Holsters are interchangeable, the 45 will take the 19X mags. Can swap uppers.
I just wanted a spare.

I have 4 Shields. My son already has one of them and my daughters can have one when they are ready. Going to buy another Shield during rebate. Debating which one.

4 various LCPs, though again, son has one.

Was into milsurps for a while. 2 Garands, 2 M1 Carbines, 3 Lee Enfields, a few SKSs, MNs and Mausers. Have 3 kids. Should look for a 3rd Garand.

Passing some out now. More as I get older and the grandkids accumulate (I hope).