ScotchWhisky said:
Glock's weak spot is it's aesthetics, they're fugly.
Click to expand...

One of the main reasons I like Glock is its aesthetics!
You will be surprised, but I like the Glock as much as the Colt 1911, I mean aesthetically.

Beard Man said:
One of the main reasons I like Glock is its aesthetics!
You will be surprised, but I like the Glock as much as the Colt 1911, I mean aesthetically.
Click to expand...

I hear ya, beauty is in the eye of the beholder. I love me some Spydercos, and lots of knife guys say they're fugly.

Not surprising. That part on a Glock is simply thinner than many other pistols.

tercel89 said:
To me it seems that the weak spot on Glock pistols is the area at the end of the slide that hangs down and accepts the recoil spring assembly. I have seen a lot of them broken and bent. I got to looking at my other guns and all of them have very beefy areas in the same spot. I wonder why Glock is so slim and thin in that area ? When you drop a Glock slide , it seems that this is the area that gets broke or bent.
Click to expand...

Full auto more pressure on parts but still shouldn't have broke off.
M

How many broken nose rings are due to not adhering to keeping a fresh recoil spring as Glock suggests?

Out of all the broken nose rings, how many were dropped after disassembly, but back together without a thought about a damaged nose ring then 6 months later a failure occurs?

P.S. if Glock is such a weak feeble design , haven't seen a Taurus,1911, SiG, S&W full auto machine pistol yet.....if there was such an animal will it last past the first day?

Joined Feb 21, 1999
·
7,335 Posts
I don’t think the Glock is a weak, feeble design. But it’s good to be aware that the metal is thinner in this area than many other pistols. Therefore perhaps a bit more care or observation of this area is simply a wise precaution. Always prudent to inspect a firearm periodically.

I just watched that video. What are the chances it happened to Hickok on camera like that?

I wonder if Glock will replace that whole gun or just the slide assembly since its a Class 3. Probably the whole gun so that it doesn't have different serial numbers. 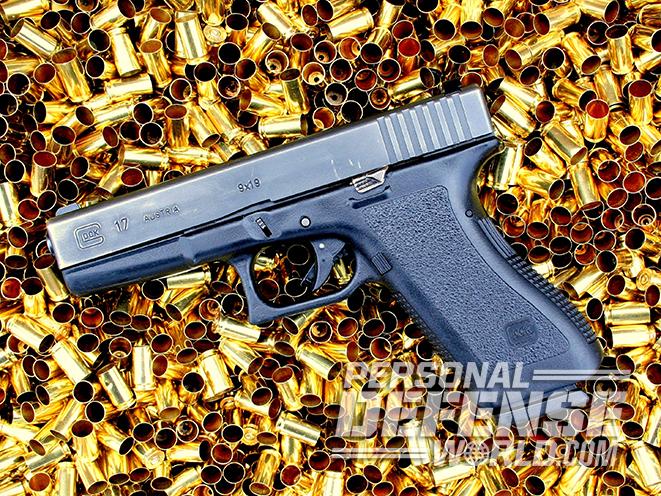 You Won't Believe How Much Abuse This Glock 17 Has Taken

This torture test—365,000 rounds and counting—shows why the Glock 17 is a safe bet if you want a user-friendly gun that'll function in any environment.

Joined Jun 9, 2002
·
28,576 Posts
Yes, the comparatively thin slide guide ring (versus the thicker spring tunnel or box area on some other pistol slide designs) may be susceptible to damage if a slide is dropped nose-first onto a hard surface, like a concrete floor.

Ditto the comparatively thin slide rail cuts at the rear of the slide on each side. (Susceptible to getting bent tight, closed or cracking if dropped onto a hard surface, hard enough.)

I don't stay up at night losing sleep worrying about it.

Solution? Don't remove and drop the slide onto a hard surface ... like while field-stripping the gun while standing at a cleaning station, out at your garage bench, etc.

These mishaps fall under the owner/user error heading, and careful handling can help mitigate the potential for them to happen.

Something to perhaps keep in mind is that the guns are much less likely to become damaged than we, as the owners/users, may suffer damage/injury while engaged in dynamic physical activities at the same time. Watch the muzzles, too, both to avoid damaging them by dropping them onto hard surfaces, and for what comes out the end of them when loud noises occur.

A lot of you folks may be old enough to remember what could sometimes happen if someone dropped a service revolver onto a roadway, sidewalk or down some concrete of steel stairs. Road rash and a bent front sight ramp might be the least of your concern. Bent yokes (or cranes, if you'd prefer), might really put a cramp in running a revolver.

I have a friend who dropped his 686 while climbing on some huge rocks along the river that border his property. He said he watched it tumbling in the sunlight, spinning, tumbling and bouncing off each and every large boulder on its way down the side of the hill. While he bent the front ramp over, and actually broke off part of the blade (losing the red ramp insert along the way), miraculously the yoke was undamaged and the carry-up not affected. (He brought it to me for inspection a while later.) Nasty looking rash, though.

He said he'd used a heavy hammer to (mostly) straighten the front ramp blade, looked it over and decided it was safe to keep shooting it, which he did for a while before he sheepishly brought it to me to inspect it. That 686 had already seen a new barrel (original well-used one ballooned-out with an obstructed bore ) close to 20,000 rounds ago, so he figured he'd gotten his money's worth out of its second life. He's still been shooting the dickens out of it on his private range in the mountains. I told him if he wanted to play mountain goat on that steep part of his property, to put a lanyard on his gun.

On the other hand, I learned of a guy who dropped his J-frame out of his pocket, while standing on a ladder next to his roof, and the snub fell onto a sidewalk, landing on its right side. Since it landed on the r/side, it sprung the cylinder open a bit, tweaking the yoke. The guy who worked on it said it had required immediate repair in order to operate again.

fastbolt said:
Solution? Don't remove and drop the slide onto a hard surface
Click to expand...

Accept Hicock didn't drop the slide on a hard surface. It happened while he was shooting the pistol. Just an observation. And no, it isn't an area of widespread concern, however, it would be an area that bears inspection every once and a while. This, along with the video I posted on page 2 shows that it can definitely be a weak spot on the pistol, even if not dropped/abused.

Deputydave said:
Not surprising. That part on a Glock is simply thinner than many other pistols.
Click to expand...

The Gen 4 and 5 are even thinner than the others ,

tercel89 said:
The Gen 4 and 5 are even thinner than the others ,
Click to expand...

yeah , I love my Glocks , but I wish they would beef the slides up in this area. My Beretta 92 , S&W M&P , CZ P07 , S.A. XD9 and a few others have very nice thick and meaty areas in this area. There is plenty of room for Glock to make them bigger and longer .

tercel89 said:
yeah , I love my Glocks , but I wish they would beef the slides up in this area. My Beretta 92 , S&W M&P , CZ P07 , S.A. XD9 and a few others have very nice thick and meaty areas in this area. There is plenty of room for Glock to make them bigger and longer .
Click to expand...

Have you broken one?

ViperR said:
If you are worried about it, get a 34, 35 or a 48 that has a much longer metal area because the slide & barrel extend beyond the end of the dust cover of the receiver/frame. This way, they all use the same recoil spring assembly.
This is my G48 which is just as long and beefy as the Taurus: View attachment 837026
Click to expand...