An SRO engaged the school shooter in TX

Joined Apr 25, 2005
·
1,918 Posts
Word according to news reports I’ve seen this morning is that there were no ”armed officers” on the scene initially. There’s going to be a lot more coming out I’m sure, and it’s not necessarily going to pin all the blame on LE. We just have to be patient.

News was also making a big production about having to wait for a ballistic shield. Since I began my career with my second agency twenty-six years ago, we always had shields available, even trained with them at the academy, and occasionally afterwards. They can be heavy for extended carry, and would get really heavy when not so current in technology lights and battery packs were added. The agency bought quality shields, but they were only Level IIIA. Testing old shields past expiration date and no longer considered serviceable, we found they would still stop common handgun rounds, but .223/5.56 zipped thru them like nothing. Level III & IV shields are available on the market, but they’re at least twice the weight of a common IIIA and cost considerably more, or at least did when I was still on that job and pricing new gear. Haven’t heard what level of shield the USMS reportedly brought to the scene and handed off to BORTAC.

The NYT article about the off duty border Patrol Agent having to borrow a shotgun is a lesson for all of us to carry off duty. I think it really needs to be mandatory. In fact, there needs to be a revival of law enforcement attitudes toward firearms, shooting skills and training.

Question regarding ALICE and ALLERTS. The later seems to have FBI blessing. Any differences between the two?
M 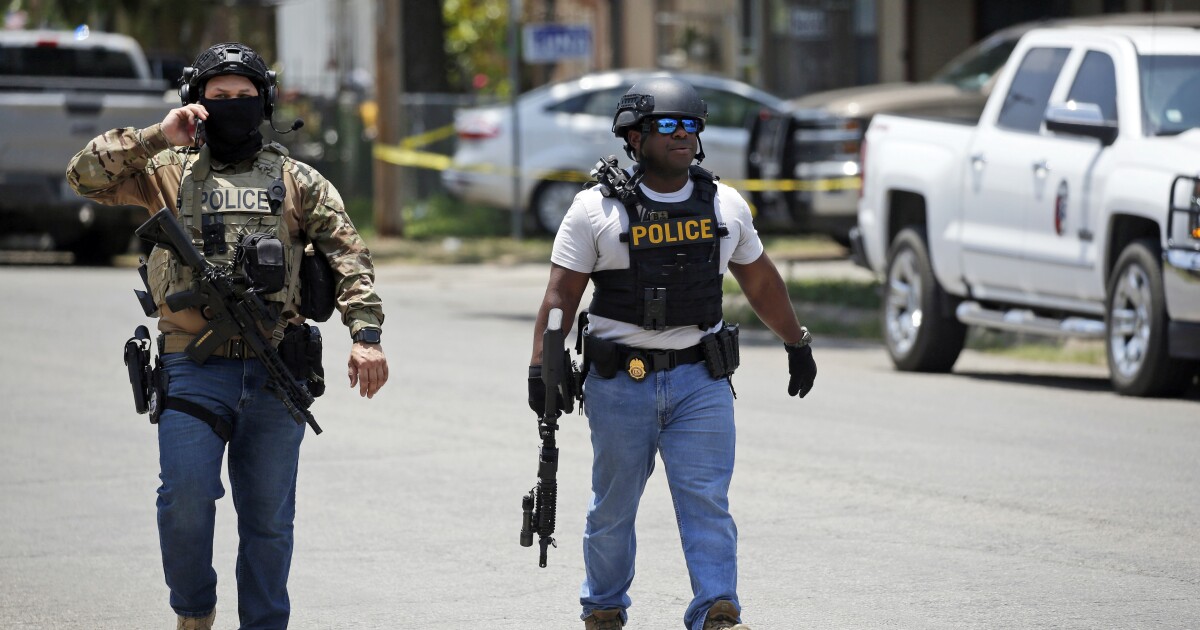 Official: 'Wrong decision' made by commander not to confront Texas school shooter

Why it took officers over an hour to enter the room is a question officials have struggled to answer.

Also saying decision not to enter was wrong one.

Interesting. Probably someone known to a lot of people in that community.

For Pete Arredondo, new Uvalde Consolidated Independent School District chief of police, Uvalde is his hometown. It’s a place he describes as a fantastic community where he was born, raised and grew up going to class, graduating from Uvalde High School in 1990. With a little more than a month on the job under his belt, he says he’s glad to be back here serving the community.
Click to expand... Melissa Federspill Staff writer For Pete Arredondo, new Uvalde Consolidated Independent School District chief of police, Uvalde is his hometown. It’s a place he describes as a fantastic community where he was born, raised and grew up going to class, graduating from Uvalde High School in 1990...

Arredondo was not among a contingent of law enforcement officials who were on hand at a Friday morning news conference.
Click to expand...

McCraw revealed that an on-scene commander made a calculation that the event transitioned from an active shooter situation to a barricade event. McCraw added that it took more than an hour for officials to enter the room.
Click to expand...

"Of course, it was not the right decision," McCraw said. "It was the wrong decision. Period. There's no excuse for that."
Click to expand...

Wonder if he's polishing up his resume, although this is going to be hard to make it shine ...

I'd also have to wonder if he was getting any advice from any of his (or any other agency's) other experienced people on-scene not to keep waiting?

This is one nasty sandwich that a few people are going to have to take a big bite out of it. Dammit.
W

Morris said:
Texas is the home to ALERRT, one of the pre-eminent active shooter training programs hosted by the Texas State University. Those trained in active shootings should know the protocols for active shooter versus barricaded shooter. That being said, there will be lots of questions, some very deep investigations and ultimately, there will be reports showing the failures and the wins including whether remaining fixed was appropriate or if the PD, Sheriff's office and school staff had any recent ASR training. But it should drive home to schools to not get complacent with security, especially with copycats wanting their 15 minutes of grim fame.

Shields, breaching equipment and training should not be a luxury for agencies. It's damnable shame that the Biden Administration and their ilk won't see that and fund that rather than worrying about little used LVNRs. The money recently spent on supporting Ukraine could have paid for shields, breaching tools and compensation for training time for every agency in the US. Hell, all the money spent on Ukraine over the last three months could have paid for added physical security to nearly every rural or small school district in our country. But politicians want dead kids to push their agendas and will blame agencies for the failures rather than appropriately harden and secure schools.
Click to expand...

A lot of the “military “ equipment that the Obama administration stopped funding for could have breeched a classroom that faced an exterior wall.
Why was it a border patrol “ SWAT” team? I don’t know if they have an MOU where they share resources on a routine basis. Where they the nearest team because of the budget funding?
W

merlynusn said:
Well if you read the article you would hear where the TX DPS is straight out saying the on scene commander made the wrong decision.
Click to expand...

I’m not sure what the relationship between the school district PD and Texs DPS is. Is the SDPD part of TXDPS? In some states it clearly would not be, but I don’t know about TX.
M

warbow150 said:
I’m not sure what the relationship between the school district PD and Texs DPS is. Is the SDPD part of TXDPS? In some states it clearly would not be, but I don’t know about TX.
Click to expand...

I think they are separate but TX DPS is the lead investigating agency.

merlynusn said:
I think they are separate but TX DPS is the lead investigating agency.
Click to expand...

Thanks. I was wondering why the Colonel was engaging the media so much if his agency wasn’t involved. That would explain it.
M

Joined Apr 16, 2001
·
11,755 Posts
In actuality, there is a truth to what the commander may have erroneously seen or decided to do: does the situation evolve from active shooting to a barricaded subject? That potentially changes the response although even in a barricaded situation, you are still entering with RTFs to conduct warm zone extractions to a CCP.

Again, lots to digest when a report is completed, rather than dribbles of information or erroneous information.
O

Joined Nov 7, 2001
·
3,367 Posts
The timeline has changed again. Supposedly it's 5 minutes from the crash to the suspect entering the school.

Also the school LEO might have arrived on scene while the suspect was still outside, but didn't see the suspect.

19 LEO's were supposedly inside the school, after the suspect barricaded, but before the BP entry team arrived.

The incident commander decided to treat it as a barricaded subject. Even though they were getting 9-1-1 calls from inside the classroom the suspect was barricaded in, by a teacher and kids, throughout the incident.

OTOH, the doors to the classroom were apparently pretty stout. Attempts to breach them by force failed. The doors were opened with keys.

Breaching a strong door, under fire, seems like a pretty easy way to get killed.

I don't know many LEA's that are handing out heavy duty door breaching equipment to patrol officers.

This was not a good response, but it is also unusual in the suspect engaging the police when they arrived. Usually active shooters flee or commit suicide when the police get there.

There also seems to be criticism that makes sense in a sound bite world. Uvalde has a part time SWAT that wasn't available for this incident.

I wonder how long it would take for anyone to get to work if they were called out of the blue, with their boss "yelling get in here!!!"

If you have resources that are not ready to go when trouble starts, it means you don't have those resources.

If you want to judge responses you have to judge them realistically. Capt Sully could have made it to an airport and landed safely, IF he had veered toward the runway immediately after striking those geese. But no one in real life acts that way.

Miracle on the Hudson
1

The School SRO who was not present when shooter arrived on campus, was in fact one of the first LE to arrive after 911 call.

He entered parking lot, but did not see the shooter hiding between cars.

Then he proceeded to detain a teacher at the school, thinking it was the shooter.

The School SRO who was not present when shooter arrived on campus, was in fact one of the first LE to arrive after 911 call.

He entered parking lot, but did not see the shooter hiding between cars.

Then he proceeded to detain a teacher at the school, thinking it was the shooter.
Click to expand...

Joined Jul 31, 2002
·
2,368 Posts
Many Texas school districts have their own PD separate from the town they may have schools in.

Texas Rangers are the lead investigative agency in this and are under direction of DPS.
1

Joined Oct 26, 2017
·
4,672 Posts
A question was the class door a steel vault door or the 2 inch hardwood.Any pictures.And if he shot thru it why Would not the police? there was a ton of ar-15s on scene or was that 3 hours later for photo op's. And after it is all said and done. what are they patrolling with armored tank type vehicles for other shooters that they missed.I watched and heard hours and hours of footage. door picture please.
and the nine cops in T shirts and team ball caps with glocks with one mag? or maybe more. I would like to see cell phone capture from all those police in that hour.IF anyone knows the door types and equipped police on site. let us know.
1