1cm said:
"Local police received a call about "a crashed vehicle and an individual armed with a rifle making his way into the school," DPS Lt. Chris Olivarez tells "Fox & Friends."

OK updated story. Police were on the way but not in pursuit. At that moment, the SRO was on his/her own.

If only the SRO had a way to auto-lock down all classroom doors.
Click to expand...

Now there’s an idea. Have a “panic button” they wear as a pendant that when pressed locks all the doors.

Sharkey said:
Well he had a radio but when you are engaging a shooter, that takes priority. News was reporting murderer went to one classroom but it was locked so he went to another. So the Q then becomes why wasn't that one on lockdown?
Click to expand...

Dukeboy01 said:
Somebody or some set of circumstances intervened very early on to get Ramos to barricade himself in that one classroom instead of roaming the building, killing people at random all through the school.

I know I said I was out, but a theory:

2. Most teachers complied and had locked their doors. 4th grade teacher failed, for whatever reason, to lock hers.

3. Backdoor was left unlocked, possibly due to parents coming and going from an awards ceremony earlier that morning. Ramos entered unchallenged.

4. Some combination of officers arrived just as Ramos was entering the school. Ramos tries to enter classrooms to escape them. There's a gun fight in the hall before Ramos enters the 4th grade classroom with the unlocked door.

5. At that point most of the massacre occurs. Ramos then barricades himself and the transformation from "active shooter" to "hostage taker" is complete.

6. The failure to secure the backdoor was the first critical failure. That's on the school personnel if there wasn't an SRO on property at the moment the attack started. If that door was locked, Ramos would have still been outside when officers arrived and more easily killed or captured with less danger to students.

7. The failure to lock the classroom door was the second critical failure. That's on the teacher. If that door was locked, Ramos would have been trapped in the halls and more easily killed or captured by responding officers following commonly accepted active shooter response.
Click to expand...

OLY-M4gery said:
The latest info I saw, is that 2 Uvalde officers were shot at through the classroom door, resulting in graze type injuries, after the shooter got into the classroom.

Pushing through a fatal funnel that the shooter is already shooting at seems like a losing proposition.
Click to expand...

Sounds like CQB. Throw in a multi bang device and make entry on top of it after the first bang. Rookie ****

walkinguf61 said:
Just adding something to think about since they appear not to have had eyes on what was going on in the classroom.
You charge that fatal funnel and lose. What stops the gunman from moving to the next classroom?
How many rounds did you fire already? How many do you have left that point?
The gunman locked the door. How are you going to take that door? He may have been shooting through the door. Do you blindly return fire not knowing if he is using kids as human shields or not?
Too many questions right now. Hindsight is 20/20.
I am speaking of those cops outside those doors in the beginning who initially engaged the gunman before those quiet 911 calls from those kids came in.
Click to expand...

I promise none of those kids are standing up straight in the room waiving for help.

walkinguf61 said:
Here is what they are saying now. 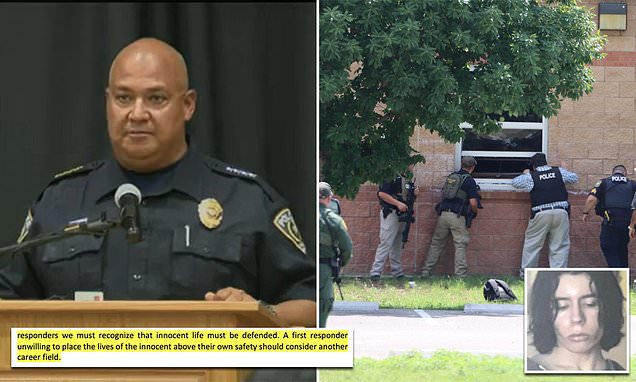 The standard operating procedure of the district's police chief, Pete Arredondo (pictured left) explicitly says that the officers needed to prioritize the students and teachers.

As I said, the real decision was made by those officers who didn’t press forward at the beginning. But that locked door was going to be an issue for them.
No one will see it in the cluttter of the critique of the cops, but those two unlocked doors is where all the difference could have been made.
Click to expand...

I keep hearing about locked doors…extreme times call for extreme measures. A couple rounds through the lock area wouldn’t defeat the lock?

All the rooms are corner fed, like standard school room construction, and usually the walls are made out of some solid construction material like block. At any rate, those doors shouldn’t have been much of an issue.

walkinguf61 said:
You are working with hindsight. Could the officers see into the room after that door was locked?
Could these officers know if the gunman grabbed a kid and used them as a shield? Or even if the kids were behind/next to the gunman?
Click to expand...

No, I’m not. I’m stating a piece of common knowledge. None of the kids are in the room doing jumping jacks. I’m stating what’s been stated over the multiple pages: that this was a CF of epic proportions and after 23yrs of training and table topping on this subject it’s still a goat ****. I’ve actually had roles in modern active shooter training for the special people (LE). And I say “special” because apparently no one knows nothin except for LE…

warbow150 said:
Just how many officers do you think carry NFDDs on them? Rookie ****? You’re kidding, right? Into a room with kids and unknown variables.
Click to expand...

How many carry them? Dunno but I suppose that answer will vary place to place. What realistic danger would a flash bang pose to the kids?

Whether they’re carried by regular guys or supervisors or not at all, or whether they’re trained to use a multi bang device and make entry on top of them is immaterial. It’s probably the best answer for the scenario.

How bout finding solutions instead of “do nothing”. Because once upon a time someone would’ve said “arrive on scene and move to contact?!? That’s ludicrous! What if this, that, etc”. And that’s exactly how it used to be, and how it changed or was supposed to have changed.

Either way, not my problem. But I do know how to handle the problem. It’s a CQB problem.

warbow150 said:
Let’s just say, sure, CQB drill was part of this, but I’m not going to get deeper into the NFDD thing with you. There’s a lot you might not know that isn’t appropriate to discuss here.
Click to expand...

Well my PM box is open 24hrs a day

walkinguf61 said:
It depends on the lock and the tools the officers had ( handguns, rifles, or shotguns). Some locks have a solid bolt that swings down rather than springs into the striker plate.A hand gun round is going to have a tough time with such a lock. Even a rifle would have issues with it. A shotgun with the right load would probably destroy the the door frame and lock around the bolt. Maybe even the door handle used to pull the door open, ( yes one can stick their hand in the hole to pull open the door). Using the key , quietly unlocking the lock and then use a rope on the handle to pull open the door for a dynamic entry makes chances of a successful entry higher. — the door pulls open rather than a good bum rush push in.
Click to expand...

There’s a lot of options other than what was actually done. Very true that knowing the door etc is useful to know which options are the better ones. The general doors we are speaking of, the locking mechanism can be defeated. Aside from blowing the door (not a likely option at all), defeating the door w/ firearms is an option as we mentioned but moving beyond that, you can manually defeat most of those locks w/ a couple simple hand tools or lock picks, and that can be done quietly. Need noise to cover the manipulations of the door? Sound the fire alarm. If cops had gone in earlier maybe they could have secured keys from the principal or custodial staff. I’m pretty sure the school has a Knox box on it also. I’m not willing to act or accept that a bunch of cops were simply confused by a standard school door.

walkinguf61 said:
Yes picking a lock is an option— can you pick a lock? I can’t with most locks. SWAT often have members who can. Heck, some of our ESU guys are elevator repair trained ( hostage in an elevator like in the movie Speed).
Everything you are mentioning are solutions for why SWAT was created.
Click to expand...

Yes, I can pick locks.

walkinguf61 said:
Yes picking a lock is an option— can you pick a lock? I can’t with most locks. SWAT often have members who can. Heck, some of our ESU guys are elevator repair trained ( hostage in an elevator like in the movie Speed).
Everything you are mentioning are solutions for why SWAT was created.
Click to expand...

Ok….what about a Knox box. Guarantee you the school has one, it’s a modern school

walkinguf61 said:
Great. You stand in front of that door if by chance you were carrying your lock picking tools-lol How long would it take . Any good locksmith/safe cracker will tell anyone you never know how long a lock will take.
Have you picked that type of lock before? Maybe you could do it. But most patrol guys can’t pick locks
Click to expand...

well, you would stand off to the side, kneel actually, with minimal exposure. Again, with a couple simple hand tools I bet I could’ve jimmied the latch open. I’ve done it before, not under fire though. And lock picks? Smaller than a pack of cigarettes.

now my whole point is that there were multiple options and ways to gain entry. Instead of making excuses for the Royal cluster **** I identify solutions that weren’t used. I mean, I thought the whole goal is to “learn and do better”. My bad

SAR said:
I’ve got a set of lock-picks. I know a few officers who have a set. If lock-picks were the answer for dynamic crisis incidents, we’d have been using them for decades. They are hardly a new invention and law enforcement has been using them since the early days when we still drove chariots. We used them for stealth entries and for those times, when time and crisis aren’t an issue. Again.. people who have not walked a mile in our shoes trying to dictate what would work better next time. If a law enforcement brother can step forward and truthfully tell me that they would have used lock picks, then I will gladly listen to him. Debriefs by necessity work better when the participants have actually dealt with similar situations.
Click to expand...

Well, if the actual problem was (which I doubt) that the door was locked and they had no key, it’s an option they could’ve spent 40min doing instead of…..nothing….. but I guess that’s not cool.

fastbolt said:
If the online list I saw of the UCISD is correct and up-to-date, does that mean the school district police serve 9 school campuses? If they have to spread 4 SRO's to cover that many school grounds, perhaps they rely upon dispatching a SRO when a call comes in? Otherwise it's luck of the draw whether one is present, or assigned (HS?)?
Click to expand...

Kinda immaterial at this point.